‘…the chains of Christ’s love’

In the last two chapters of his gospel, Luke writes of the death, burial and resurrection of Jesus Christ. Luke tells of Jesus’ journey on the road to Emmaus with two of His followers, and Jesus’ charge to those gathered with the eleven remaining apostles.

“Then He opened their minds to understand the Scriptures, and he said to them,

“Thus it is written, that the Christ would suffer and rise again from the dead the third day, and that repentance for forgiveness of sins would be proclaimed in His name to all the nations, beginning from Jerusalem. You are witnesses of these things. And behold, I am sending forth the promise of My Father upon you; but you are to stay in the city until you are clothed with power from on high.”
Luke 24:45–49

As I was thinking over the mission of the apostles as eyewitnesses to Jesus, I thought of these words Peter wrote as an eyewitness some thirty years later,1 to those who had never seen the Lord Jesus:

“Blessed be the God and Father of our Lord Jesus Christ, who according to His great mercy has caused us to be born again to a living hope through the resurrection of Jesus Christ from the dead, to obtain an inheritance which is imperishable and undefiled and will not fade away, reserved in heaven for you, who are protected by the power of God through faith for a salvation ready to be revealed in the last time.

“In this you greatly rejoice, even though now for a little while, if necessary, you have been distressed by various trials, so that the proof of your faith, being more precious than gold which is perishable, even though tested by fire, may be found to result in praise and glory and honor at the revelation of Jesus Christ; and though you have not seen Him, you love Him, and though you do not see Him now, but believe in Him, you greatly rejoice with joy inexpressible and full of glory, obtaining as the outcome of your faith the salvation of your souls.”
1 Peter 1:3–9

In their distress over their various trials, those who had never seen the Lord Jesus needed the comfort and assurance that Peter, an eyewitness, could provide. In his commentary on 1 Peter, Edmund Clowney writes:

“…Peter knows that his witness is true, that Jesus Christ is real. He has tasted that the Lord is good, and that his goodness will not fail. ‘This is the true grace of God. Stand fast in it’ (5:12).”2

Clowney translates, “have been distressed” as “have had to suffer grief.” I think that’s a much more graphic description. Our trials leave us grieving and suffering pain. We need the words of an eyewitness to tell us, yes, Jesus is real; yes, this is the true grace of God; yes, stand fast in it. 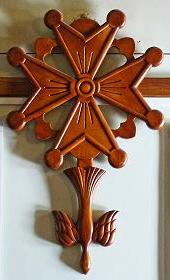 Clowney tells a very moving story about the suffering of some who had never seen Jesus, but believed in Him:

“The Museum of the Desert in the Cevennes mountains of southern France commemorates the sufferings of the Huguenot martyrs. When Louis XIV revoked the Edict of Nantes is 1685, Protestant public worship became a crime. Men caught at secret worship services in the fields were sent to the galleys. Chained to a rowing bench, they slaved at the oars until they died. A replica of one of the great galley oars hangs in the museum today. Underneath is a model of a galley. Beside it are inscribed the words of a Reformed Christian galley slave: ‘My chains are the chains of Christ’s love.’

“Peter reflects on the love that his readers have for Christ, love that makes them ready to suffer so that their proven love can be his tribute. Though you have not seen him, you love him. Peter, of course, has seen the Lord. His love for Jesus could bring pictures to mind…Through the witness of Peter and the other apostles we learn about what Jesus said and did. They bear witness through the Holy Spirit, and by the witness of the Spirit we are brought to know and love the living Lord.

“We did not see Jesus; we do not now see Jesus; but we shall see Jesus. Peter contrasts the past and the present with the future (1:8). The day is coming when Jesus will be revealed. In that day the goal of our faith will be realized. Our eyes will behold the One we have trusted and loved.”3

I want to tell you another story. During my life I have suffered the loss of my hearing, lengthy illnesses, the death of my brother to AIDS as well as afflictions of varying intensity because of my Christian beliefs (nothing like the Huguenots!). The shock of the last few years was piled on top of those events of prior years, and that impact combined with the severity of recent loss and abandonment has made my grieving like a hemorrhaging wound. I have never gone through such storms of doubt as a Christian, and I have never gone through any affliction with so little comfort. When something like that happens, you keep going, you persevere—but the grieving is real because the loss is real.

On the last Saturday in July, as I was praying, I told God my grief was a wound that kept hemorrhaging and would not stop; I could not end it, and I asked Him to stop the bleeding. I knew I would be going through these last two chapters in Luke for my daily Bible reading, and because I’ve read them before I generally knew what they contained, but I didn’t know how they could help me. As I read, however, I thought of 1 Peter, and then because I’ve been helped by Clowney in the past, I turned back to his commentary. I reread the story of the Huguenots and I reread his translation: “have had to suffer grief.” Grief, the same word I had used. It is so descriptive of how I have felt.

You see, suffering hurts. There is grieving over what has happened. When we suffer we need those who will weep with us when we weep. Their identification with our pain eases ours; their love witnesses to us that God loves us when our life has fallen apart, and their love calms the storms of doubt. Those storms accelerate into hurricanes when the love of other Christians is not present. Os Guinness describes the struggle to trust God so well:

“…the hard question is whether we can say, ‘Father I do not understand you, but I trust you’ while we are still in the darkness….

“Can faith bear the pain and trust God, suspending judgement and resting in the knowledge that God is there, God is good, and God knows best? Or will the pain be so great that only meaning will make it endurable so that reason must be pressed further and further and judgements must be made?…To suffer is one thing, to suffer without meaning is another, but to suffer and choose not to press for any meaning is different again.

“…To suspend judgement and simply trust is the hardest thing. Faith must reach deep into its reserves of courage and endurance if  the rising panic of incomprehensible pain is not to be overwhelming.”5

Incomprehensible pain can almost overwhelm us. We need to read and know the words of the eyewitnesses to Jesus Christ to give us courage and endurance. God gave us His Word because He loves us, and He knew we would need to read what those eyewitnesses could tell us about the reality of His Son, Jesus Christ as we suffer and struggle to trust Him. God knew the circumstances of my life, and that on that Saturday I would read Luke 23–24 and remember Peter’s letter. God knew that Dr. Clowney had translated Peter’s words with the same word I had used in my prayer that morning: grief. So the Holy Spirit comforts my heart and strengthens me in the midst of my darkness to trust God.

The faith of those of us who have never seen Christ, but who love Him reaches back to those first eyewitnesses who saw Him, loved Him and who yet witness to us about Him.

“I have written to you briefly, encouraging you and testifying that this is the true grace of God. Stand fast in it.”4
1 Peter 5:12

‘My chains are the chains of Christ’s love.’

The National Huguenot Society has this explanation of the symbolism of the Huguenot Cross:

“The insignia consists of an open four-petal Lily of France — reminiscent of the Mother Country of France — in which each petal radiates outward in the shape of a “V” to form a Maltese Cross. The four petals signify the Four Gospels. Each petal, or arm, has at its outside periphery two rounded points at the corners. These rounded points are regarded as signifying the Eight Beatitudes.

“An open space in the shape of heart is formed between each fleur-de-lis and the arms of the two petals with which it is joined. This shape—a symbol of loyalty—suggests the seal of the great French Reformer, John Calvin.

“A descending dove pendant representing the Saint Esprit or “Sainted Spirit” — the guide and counselor of the Church — is suspended from a ring of gold attached to the lower central petal.”

John Calvin’s personal seal depicts a hand holding out a heart to heaven. This photograph is from Dan Phillips’ post, The Extraordinary Life of John Calvin, Steven Lawson (PCRT 2009 Sacramento), at Pyromaniacs.

1 Response to ‘…the chains of Christ’s love’